Singapore Dollar(SGD) is the currency of Singapore. SGD is one of the strongest valued currencies in Asia-Pacific. The Monetary Authority of Singapore issues SGD banknotes and coins. In addition to Singapore, the SGD is also accepted as customary legal tender in Brunei. Likewise, the Brunei dollar is also usually accepted in Singapore.

Unlike other major currencies, all SGD in circulation is fully backed by external assets in Singapore’s currency fund. The assets are gold, silver, foreign exchange, Treasury bills etc. It can also be tradeable securities like equities, bonds and futures contracts. In addition, the MAS(Monetary Authority of Singapore) holds substantial reserves of USD. In fact, this USD reserve is almost 10 times the equivalent value of SGD in circulation as of year 2020.

Singapore is a net creditor, which means the assets held by Singapore are larger than it’s liabilities. Even though, SGD is a free float currency, Monetary Authority of Singapore sets an (undisclosed) upper and lower bounds. However, SGD is not pegged to any other currency. Singapore is one of the top 5 financial centres in the world, with free-market and corruption free economy. Key exports are consumer electronics, software, pharmaceuticals and financial services.

Earliest records indicate civilisation in Singapore existed since the 13th century. An early recorded name of a settlement on the site of modern Singapore is Temasek.

In 14th century it was named Kingdom of Singapura by then king Parameswara. Ever since then, it has been used as cache, warehouse and trading outpost. Singapore lies at trade routes between India, China, Malaysia and Indonesia. Hence, it had been contested by many kingdoms over the years for control on trade in the region.

European colonial powers began taking control of Malay Archipelago between 16th and 19th centuries. Portuguese established trading ports in the region from1509. Dutch soon followed in the 17th century. In 1819, the British recognised the strategic importance of Singapore in their trading routes between China and India. In addition to the location advantage, Singapore possessed a natural deep harbour, freshwater supplies and timber for repairing ships. 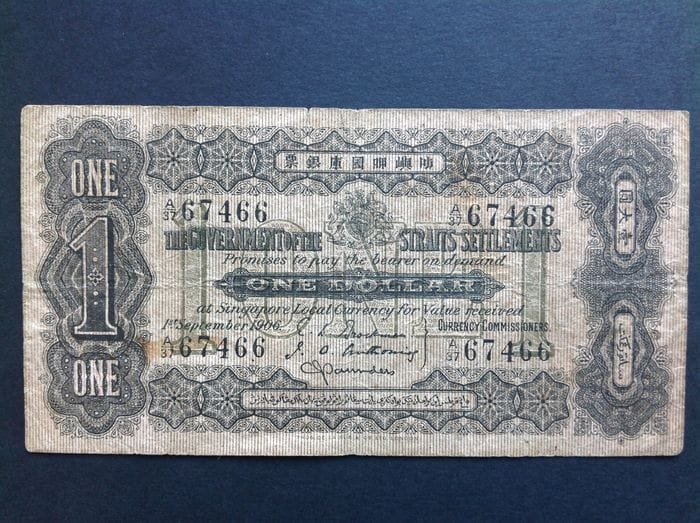 The British forged an alliance with the nominal ruler of Singapore – Sultan of Johor. Thereby taking control of the port from the Dutch. At this time, Indian Rupee and Spanish Dollars were the main trading currencies. From 1845, Singapore started to use the Straits dollar issued by the East India Company. This was equal in value to the Spanish Dollar. Singapore used the Malayan dollar from 1939. And from 1953, the Malaya and British Borneo dollar.

Singapore used Malayan dollar until 1967, two years after it’s independence from Malaysia in 1965. The Malayan Dollar was pegged at 8.57 dollars per 1 pound sterling. Singapore introduced the new Singapore Dollar(SGD) introduced in 1967 at par with Malaysian dollar(now Malaysian ringgit). So, SGD value at this point was SGD 8.57 = GBP 1.

Sterling area and USD convertibility to gold ended in the 1970’s. This ended the SGD peg to Pound Sterling. However, SGD was pegged to the USD for a short period of time after end of Pound Sterling peg. Singapore industrialised in the 1970’s and international trade grew. SGD was pegged to a trade-weighted basket of currencies from 1973 to 1985. From 1985 onwards, SGD became a free float currency. MAS(Monetary Authority of Singapore) controls the fluctuation of SGD within an undisclosed range. They define this range based on weighted basket of currencies. The weights are based on balance of trade with the respective countries.

Singapore controls the upper and lower bound of SGD rate to avoid imported inflation. A strong currency makes imports cheaper. So, this can cause a lot of money to be supplied to buy imports. Hence, this can lead to fall in the value of SGD due to over-supply. On the other hand, strong currency makes exports expensive. So, less demand for SGD. Hence this can cause a further fall in the value of SGD. This is imported inflation because, domestic products are more expensive than imported products.

STOKAI provides daily fx prediction using algorithms based on all factors that impact the price of given currency pair. Then, it evolves this over 10 days in the future. Tutorial and brief user guide is available here – Tutorial. If you have any questions, please contact us.