In addition to Hindi and English on the front of an INR note, 15 other Indian languages appear on the reverse. The rupee is subdivided into 100 paise. The word paise or paisa(singular) is used colloquially to mean money. India was one of the first civilisations in the world to use metal coins. This has been dated to around 6th Century BC. However, the coinage used in the Indian subcontinent has undergone several changes mainly due to changing regimes.

Several other countries used INR as the official currency in the early 20th Century. For instance Aden, Oman, Kuwait, Bahrain, Qatar, the Trucial States, Kenya, Uganda, the Seychelles and Mauritius. The British also introduced INR to Strait Settlements in the 19th Century. However it did not work. The locals were used to Spanish silver dollar.

Indian Rupee is a managed free float currency. Reserve Bank of India(RBI) actively participates in the USD INR market to maintain an effective exchange rate. While, other INR pairs such as EUR INR and INR JPY have the volatility typical of floating exchange rate. This creates arbitrage opportunities against the RBI intervention in the USD INR market.

The word “rupee” is derived from a Sanskrit word rūpya. It means wrought silver stamped with an image or a coin. Mauryan empire in 4th Century BC was the first known empire that united the country into one sovereign nation. In ancient Indian texts, Chanakya, prime minister to the first Maurya emperor Chandragupta Maurya (340–290 BC) describes the currency used. Therein, he mentions silver coins, called rūpyarūpa. Other coins mentioned were gold coins (suvarnarūpa), copper coins (tāmrarūpa) and lead coins (sīsarūpa). 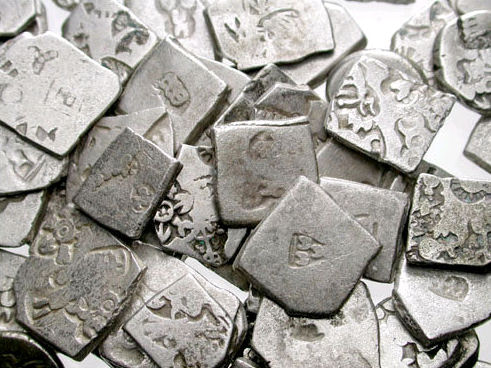 Following the decline of Mauryan empire, Indian subcontinent was divided into a number of smaller kingdoms. Each minting their own currency. In addition, each invading tribe brought their own coinage with them that either replaced or influenced the coinage. However, the word rupya was always used as a generic term for any silver coin. And the word paisa meant money. The word paisa or paise is used to this day to mean money.

During his reign(1540–1556), Sher Shah Suri introduced rūpee as a currency name. He defined the rupee as a silver coin of a standard weight of 178 grains. And this was the precursor of the modern rupee. He also introduced mohur which was the name for the gold coin weighing 169 grains (10.95 grams). The silver coins remained popular due to wide availability and since the coins were worth their value in weight.

Thereafter, the British Indian govt. issued coins with the reigning British monarch’s image. The silver Rupee remained popular during much of the 19th century. This had severe consequences on the standard value INR, as stronger economies were on the gold standard.

The Bank of Hindostan(1770–1832), issued the earliest INR paper notes. The General Bank of Bengal and Bihar (1773–75) and the Bengal Bank (1784–91) also issued paper INR notes, backed by gold mohurs. The British Indian government created the country’s Central Bank – Reserve Bank of India in 1935. It had the authority to print INR notes for the entire nation.

In the early and mid-20th century, several British controlled territories used INR as the official currency. For instance, East Africa, Southern Arabia and the Persian Gulf. Acute shortage of silver during the First and second World Wars, led to wide circulation of paper INR notes.

From 1950, India ran continued trade deficits that increased in magnitude in the 1960s. Furthermore, the Government of India had a budget deficit problem and could not borrow money from abroad. The private corporate sector, had a negative savings rate. As a result, the government issued bonds to the RBI, which increased the money supply, leading to inflation.

In 1991, India still had a fixed exchange system. The INR was pegged to the value of a basket of currencies of major trading partners. India started having the balance of payments problems in 1985. Then, by the end of 1990, it found itself in serious economic trouble. Therefore, the government allowed INR to depreciate in 1999 against the USD.

INR, is now a managed free float currency. However, the Reserve Bank of India participates in the foreign exchange market to maintain an effective exchange rate against the USD.

STOKAI provides daily fx prediction using algorithms based on all factors that impact the price of given currency pair. Then, it evolves this over 10 days in the future. Tutorial and brief user guide is available here – Tutorial