The name ‘Pound’ comes from the Latin word ‘libra’, which refers to weight and balance. GBP is the fourth most traded currency in the world after USD, JPY and EUR. GBP is also a global reserve currency. This means that Central Banks of other nations keep significant amount of GBP in their foreign reserves. Also, GBP is part of basket of currencies used to calculate IMF special drawing rights.

UK’s central bank, Bank of England has the authority to issue GBP. In addition, it also allows GBP banknotes’ issuance by Scotland’s and Northern Ireland’s private banks. Moreover, crown dependencies(Isle of Man, Guernsey etc.) produce their own issues of Pound Sterling. All of these authorised private banks and govt. Pounds are equivalent in value to GBP issued by Bank of England.

GBP is a fiat currency. Along with USD in 1971, GBP was also made a free float currency in foreign exchange markets. So, instead of precious metals, GBP is backed by promise of the UK government to pay it’s liabilities. And, the investors trusts UK government to pay it’s debts on time. Therefore, UK Sovereign bonds(Gilts) have a very low probability of default. And hence, UK govt. can borrow at favourable interest rates.

The pound was a unit of accounting in England around 775 AD. It was equal to 240 silver pennies. And, it was equivalent to one pound weight in silver. It was first used by Anglo-Saxons who populated England from 5th Century AD. The pennies were made of purest form of silver available at the time.

In 1158, King Henry II introduced new coinage made of 92.5% silver. In fact, this became the standard until the 20th century. This standard is called Sterling silver today. Sterling silver is harder than pure silver. So, Sterling Silver coins kept their shape and engraving for longer and did not wear down too easily. All English coins were made of silver until 1334, when gold coins were introduced.

Inspite of the availability of gold coins, silver coins remained in circulation and were the main legal tender. In subsequent centuries, the weight of the penny was lowered. Gradually, the pound in value weighed less than a pound of silver. By the middle of 16th Century, the coins contained just a third silver and two thirds copper. The size, composition and value of the gold coins also fluctuated considerably.

GBP in the british empire

In 1694, King William and Queen Mary founded The Bank of England. It was a private bank, to act as a banker to the Government. William Paterson founded the Bank of Scotland next year. Both banks began to issue paper currency. 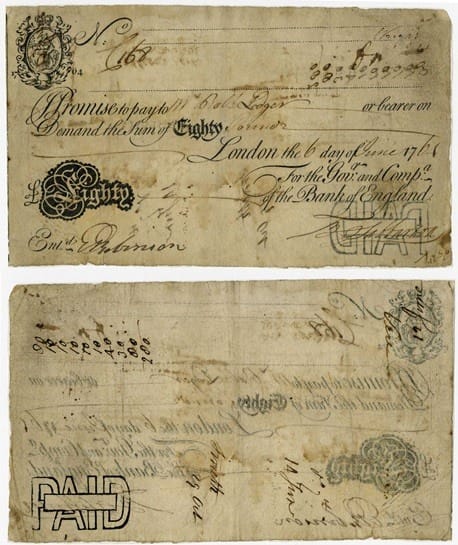 In late 17th century, Guinea was introduced with initial value of 1 Pound Sterling. However, due to price rise of gold, the coins actually became more valuable than the silver Pound. So, the English merchants preferred to make payments abroad in silver and accept payment in gold. To compound this problem, Chinese only accepted payments in silver, as they were used to Spanish silver dollar coins. In addition, English silversmiths were used to melting silver coins for making silverware as they trusted the purity of sterling silver from The Mint. This led to a shortage of silver coins at home and GBP effectively became gold standard.

Most of the British Empire used GBP. While, some countries used GBP outright, others used it alongside the local currency. In addition, some countries created a local version of the GBP such as South African Pound, Australian Pound etc. valued at par with the GBP issued by Bank of England.

Bank of England GBP notes were legal tender during American war of independence(1775–1783) and the Napoleonic wars(1803–1815). The GBP value at the time was relative to price of gold. In 1816, Bank of England formally adopted the gold standard for GBP. Then the bank minted silver coins at a rate of 66 shillings to a troy pound of sterling silver. So they became token coins, i.e. not containing their value in their weight. The Bank did that to overcome the shortage of silver GBP coins.

In 1817, Bank of England introduced the sovereign – a gold coin with nominal value equal to one GBP. It replaced the Guinea as the standard GBP gold coin. By the 19th century GBP was the primary reserve currency of the world. So, countries around the world, widely accepted GBP. Then, during the late 19th and 20th centuries, most countries adopted the gold standard. Hence, gold became the base, to easily calculate conversion from GBP to other currencies.

After World War II, 44 countries signed the Bretton Woods agreement, a new international monetary system. As a member, Britain agreed to keep GBP pegged to the USD. And, US government fixed the value of USD to a certain amount of gold. On August 15, 1971 US ended the convertibility of USD to gold. This brought the Bretton Woods system to an end. Britain also made GBP into a fiat currency and free float on the international currency exchange.

The Latin Monetary Union(LMU) was a 19th-century system that unified several European currencies into a single currency standard. At that time, most nations minted gold or silver coins. Hence, they started minting coins according to the LMU standard. The LMU standard was established in 1865 and disbanded in 1927.

Moreover, many countries minted coins according to the LMU standard, even though they did not formally join the LMU treaty. However, Britain decided against joining the Latin Monetary Union.

The Euro is the new ‘single currency’ of the European Monetary Union, adopted on January 1, 1999. The UK did not adopt the Euro as its official currency for the duration of its EU membership. UK secured an opt-out at the Euro’s creation via the Maastricht Treaty in 1992. Bank of England was only a member of the European System of Central Banks. So, GBP continues to be the currency of UK.

STOKAI provides daily fx prediction using algorithms based on all factors that impact the price of GBP USD. Then, it evolves this over 10 days in the future. Tutorial and brief user guide is available here – Tutorial